On the 28th september 2019, at 7:14 pm, the Australian correspondants arrived in Angoulême’s train station. Before their arrival, we came at 6:45 pm to have the last information about their journey in our town. After 26 hours by plane and 3 hours by train, they finally arrived in our city under applauses from the french families. They were really tired so we went as fast as possible in our respective house.

For our part, our correspondants met our family and our pets around pizzas and the movie “Back to the future”. They, of course, settled in their new room, and then went to bed.

The hosting had started…

We went to visit the city, Angouleme thusday, 1st october to present the city and the painted walls to our penfriends . At 8:00 am, we left the high school fot the the city by bus . First , we saw Lucky Luke which was presented by two French students. Then, we also saw thrcity hall of the Angouleme . The weather was not good, we sheltered at the market at “la place du marché”.

We made the australians discove specialities like macarons, chocolatine, croissant and also saucisson. finaly the penfriends stayed in the city 17:00 pm and we came back to school .

Friday 4th October, Ruben and Jasper came to Matis house at 3 p.m after the class. We did karting and went to the mall to buy stuff to make hamburgers.

The next day, we’ve ridden bike with Jasper and Ryan in the city of Rivières and came back to house to eat raclette, the pen pals appreciated it. In the afternoon we were joined by Clotilde, Jasmine and a friend Yann to play laser game.

The next week end, we went to La Rochelle, to see the ocean, do shopping, play football and swim into the ocean. On sunday we went to an event called « les Cages » in La Grand-font to watch different shows. After we came back to our place.

During this exchange, we welcomed an australians students in our house. They were with us during three weekends. The first was short because they arrived on Saturday, in the evening but on Sunday we went to the « Dune du Pila » for the afternoon and get to know each other. During the week, we went to our our activites (like horse-riding, climbing..). For the second weekend, we went to the gym and McDonald’s on Friday. On saturday, we went to horse-riding and the valley of the monkeys. And Sunday we returned to Bordeaux, to do shopping, because on thursday the australians students went to Bordeaux and loved this city, so they want return.

When the Australian students were in France, they lived in the family of their Pen-friend. Thanks to that, they discovered trench culture and food. Like french bread, cheese, raclette and others differents specialities. Without forgetting the timetable and the highschool of their Pen-friend. They did activities like ice skating, treetop adventure, bowling, karting, cooking… With their Penfriend family they visited castle, sea, other regions like Auvergne and Dordogne. They came with gifts from Australia like Tim Tam (chocolate biscuit), vegemite spread, chocolate, a lot of presents… 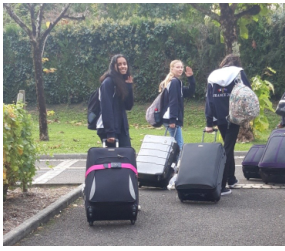 Thursday night after the afternoon to chocolate shop letuffe, we was participate to the « official » party with the mail and all families to say say good bye.

After saturday night the french student make party at the bowling for everybody who could come.

During this evening we were sixteen and everyone had a good time.

About the last day, monday morning all student french and australian comingat 8a.m to the school with their suitcases they may have left in the amphitheatre.

Thus the australians were able to follow the french for their last 2 hours of classes. At 10a.m everyone is found in the amphitheatre for the ultimate goodbye.

Tully took the opportunity to make a french speech. And we had some tears !!

For end, them we stay to the portal and these as well as these intense 2 weeks ended.