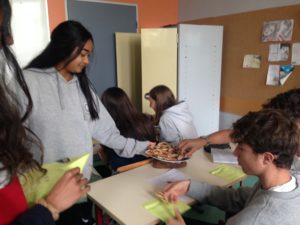 We have welcome Australian Students in our Euro Section class the first Monday, when we presented our PowerPoint, about our country and our city. The second Monday, they presented us their country, their culture, etc.
​
They were separated into two groups:
​
The first group, talked us about the geography of Australia, with it’s six states and it two territories. The Australians Students showed us where Perth was located in Australia. Then, they talked about the Australian’s demography. They continued with the main sports practiced in Australia, and the biggest teams. After, the showed us their desert, mountain and beach’s landscapes. To finish, they talked about the history of Australia, with indegenous and the European colonisation.
​ 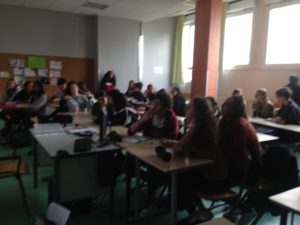 The second group presented us their school and the Upper School. Then, they told us about the wildlife and the most dangerous animals. After, they quoted the Australian celebrations and the myths. Later, they made us a tasting of local products. They thought us the expressions of the Australian. To finish, they organised a little quizz for us with rewards.
​
​LINARD Axelle; GUÉDON Elodie
During our meeting with the Australian students, we exchanged informations about our lifestyles.
One of the presentations was on the theme of school. It taught us, for example, that our Australian guests wear uniforms in their high school. Their school hours are different because they do not have classes in the afternoon. And they have to take their meals with them, but if they forget they can buy some from high school that are not expensive.
Another presentation on animals show us the multitude of dangerous animals in Australia, like tarantula , red black spider , tiger shark and sometimes Australians can’t swim because of crocodiles. There is a little bird called Magpie that attacks people and has already caused accidents.
With one of the presentations we learned a few words from Australian slang like “Aussie” for Australian, “wag” means go to school. There also to say yes it’s “nah yeah” and for no it’s “yeah nah”. 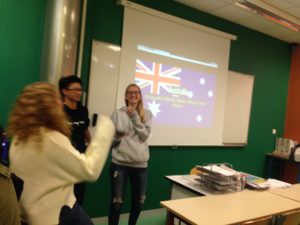 Australian food is quite different from ours, for example they eat a food called Vegemite, it is an Australian food spread. They have Chocolate Lamingtons which is sponge cake with chocolate and coconut. And they have a lot of barbecues. The celebrations are also different. With for example ANZAC  Day To remember soldiers of the First World War.
Sport in Australia has an important place, sports like football, in Australian slang “footy”, with Eagles as the best team, swimming with Ian Thorpe as the best swimmer, cricket where their team has a world-class level and rugby are the most popular sports in Australia.
With the presentations of our Australian correspondents we discovered that their way of life  are very different from us, this has greatly enriched our personal.
​
vigneron anhecia, heroguez abgral Laura
Sortie des 1èreSTMG 3 : Destination Cognac et Trois-Palis
Día de los muertos
ARTICLES
ARCHIVES